A Reflection On Yoga And Emotional Health

I am experiencing something pretty interesting, and I thought I would write about it here a bit. In my past, I have had some very, deeply serious emotional/psychological issues that in point of fact were totally hamstringing my entire life. I knew I had serious problems, and have tried just about everything under the sun to treat myself. And my attempts have run teh gamut from drugs to Jesus, and everything inbetween. Those of you who read my material when I first started blogging here came into contact with just a bare modicum of my neurosis....and you saw it in the form of some seriously headstrong stubborness.

So as I have shared here, I began both drinking Ayahuasca, and practicing Zen....both a little over four years ago. I had tinkered with yoga before that, but around the time I was blogging here before is when I was starting to get serious about yoga. So anyway, I drank ayahuasca solo for quite some time. And then about a year ago I was able to get invovled with a formal medicine/healing circle where ayahuasca is the sacrament. I still have not been able to get properly involved with the Zen temple here in Denver yet. I have to finish my mathematics education to free up enough time to do that.

But the long story short is that after about twenty years of really hard searching to find healing for my troubles, Zen and aya have been the miracles I needed to finally begin to open the doors to the prison I lived in for so long. I am finally becoming free. And to write that I am "finally becoming free" brings me almost to the point of tears to even type it.

The last few months have seen a huge culmination of a hell of a lot of really, really hard Zen work. And drinking ayahuasca in a more formalized environment has been awesome.....truly awesome.

So the interesting thing I want to get to is the following: I didn't practice yoga very much for maybe a year or two. I don't really know what the internal was. But that time interval saw that big culmination of all that hard work. And now, asana is coming so much easier. It is really amazing. When I used to be pathologically headstrong/stubborn, I would work endlessly...for hours at a time on some asana. Then I would often time erupt in a spasm of self loathing and self hatred because I couldn't do whatever it was that I wanted to do.

I also got injuries. You guys remember those tendon injuries I got on both knees. I also gave myself some good solid nerve damage in the quadriceps of one of my legs while working on hanumanasana before I was ready for it. Another time I seriously buggered up a hamstring pushing myself waaaaaaaaay to hard into forward bends. And there were other more minor injuries. I must be really fortunate to not have any of those injuries anymore. I count my blessings every time I practice now.

So now I'm doing much better as I progress with my healing and continue my morning Zen work, and drink ayahuasca every chance that I can. And practicing yoga is the most amazing thing now. By no means do I feel I have achieved the goal and have 'made it' or anything. But when I practice now, I have a strong sense of there being a lot less 'blockage' when I practice asana. That is the only way I can explain it. Compared to a while ago, as I descend into a forward bend for example, my ability to breath into it, and sort of 'fall into the pose' comes so much more easily.

Before I would sit there and grunt and sweat, trying to force my body and spirit to do something, and then sometimes getting physically hurt, and almost always getting psychologicalyl hurt as I would condemn the very day I was born for not being able to do something after so many hours of practice. I practice a lot less to by the way, and stuff just comes so much easier. Here is one that I used to work on all the time, and I could get kind of deep into it, but it would just never come. This time around, I put my mind around to working on this asana and it came to me in just a couple of weeks. I couldn't even believe it. 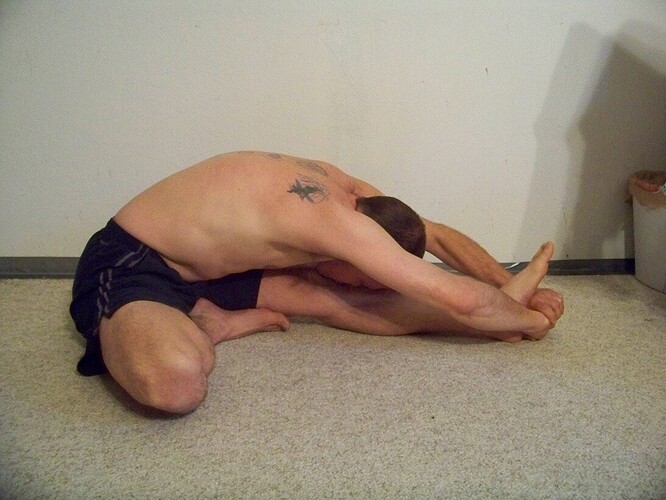 There are others like this also. I don't know the name of the posture, but it is the one where you do side splits and then lean forward so that you whole belly and torso is laying flat on the ground. I have always wanted to do that, but have been pretty inflexible in the 'stuff' in the inside of my thighs. So I figured it would take a year or two to get all that stuff opened up, and I was happy with that.

The different thing that I did was to ditch my side splitting machine. I used to get into this damn machine and crank the thing as far as I possibly could. Then, I would there breathing like a freakin' telephone stalker and just wishing the next few minutes of my life would hurry up and get over with. Then, I would find that I was somehow not any more flexible than when I started. Months of doing that got me nowhere!

So instead, I just worked without the machine and let myself breath deeply like I do in Zen, and slowly 'fall into the posture'. It blew my mind when by the second day I got probably 75% into the posture.I honestly couldn't believe it. I was so excited and felt soooo good!

So I'm not here to blow my own horn or anything. But I just wanted to reflect on how vital good emotional/psychological health seems to this practice. I don't know if it is my imagination or not, but my inside just seems to have a lot less 'blockage'. And asana is coming so much faster now. If it stops coming faster, that is fine. I am happy practicing yoga and being fit, practicing Zen and drinking ayahuasca. If yoga makes me upset, then what is the point?

So that is my reflection on yoga and psychological health. Thanks to anyone who read this entire rant. I hope everyone is having as wonderful a 2011 as I am! Peace everybody!

What is ayahuasca? I’m always looking for holistic alternatives to some forms of western meds.,

Well, ayahuasca is medicine in a more native American kind of a way. Its not really something one takes to get physical healing. Although, there are miracles and physical healings that do happen with some aya drinkers.

Pharmacologically, ayahuasca is a harmine alkaloid that comes from a number of different plants, but caapi vine is the most traditional ingredient. It also has some kind of DMT bearing plant such as Chacruna. It is an extremely potent sacrament. Our healing/medicine ‘services’ last anywhere from six to sixteen hours.

There is a reason that it is not used as a party drug. People who drink aya recreationally tend to do it once, and become so afraid that they never do it again. Aya needs to be approached with much reverence and respect. When approached in that fashion, aya can totally change a person’s life. In South America (upper Amazon river basin) there are drug rehabilitation facilities that are based entirely on drinking aya, and the shamans help the addicts through their visions etc. The rates of recovery are very high, and there are heroin addicts for example that never even experience physical withdrawals. It is totally miraculous.

I personally don’t share my experiences with aya, The wisdom that comes from the shamans is that sharing the experiences causes them to lose their power. And there is no way I want to sacrifice even one iota of my healing. But if aya calls you, and you can find some way to drink it, then definitely do not pass up the opportunity.

Does any of that help?

Actually yes, that’s very helpful. Thanks for sharing. I’m glad to hear you’ve come to a happier crossroads in your journey. I’m also trying to work more on breathwork and relaxation and have found a great deal of healing in meditation and yoga.

I’m usually always open to learning more though so I enjoy hearing about others journeys.

Yoga has been a great way for me to relax and find peace, but it's also helped me to identify my emotions. When I'm feeling off, it's easier for me to take the time to figure out what's going on inside of me. When I'm stressed, I know I can go to yoga and work through the problem. Yoga helps me with my relationships because it helps me be more aware of my own needs and emotions.

It can be hard to communicate your feelings when you're upset, but being able to go through the poses gives you a chance to get things out in a different way than if you were just exploding. It's important to be aware of your emotions and understand where they come from so that you can deal with them effectively, and yoga has helped me get better at that.